Home 35 - 55 Group The rand has strengthened, what should I as an offshore investor, make of this?
Back

The rand has strengthened, what should I as an offshore investor, make of this?

The rand has strengthened, against all odds, over the past six months. Our clients have been vocal about this and are asking the following question: what is the longer-term prognosis for the rand? This is not an easy question to answer as there is a whole spectrum of different opinions from economists and financial scholars.

The rand’s good performance over the last six months is mostly due to a much weaker US dollar. Global instability has been the theme for 2020, largely due to the uncertainty of the US elections and Covid-19’s long trail of economic consequences. We need to be clear that the rand has not strengthened due to an improvement in South Africa’s underlying fundamentals.

The South African Government has had to borrow significantly to steer South Africa through the first wave of Covid-19. Additional government grants have been instituted, and certain trade unions are pushing for these to continue. Ongoing Covid-19 relief packages will put additional pressure on the Government’s finances going forward. The interest on these Government loans is staggering and income tax income revenue is dwindling as more than a million tax payers have lost their jobs.

Against this backdrop, it is difficult to predict whether the rand will strengthen consistently going forward. This graph shows that the rand has strengthened from R19/$ in April to a R15,48/$ as of 13 November. 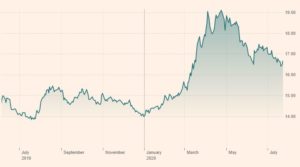 However, the following graph shows the performance of the rand over the last 30 years. We can see a steady decline of around 5,24% per annum. This does not happen in a consistent fashion (which would be a straight line on the graph), but rather is a combination of peaks and troughs in the currency, as shown on the graph. It is important to note that the depreciation still occurred during times of great prosperity in South Africa, under finance ministers such as Trevor Manuel. 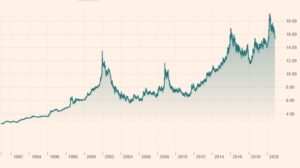 Therefore, we conclude that while it is reasonable to expect the rand to strengthen from time to time in the short term, we at Ultima do not believe this strengthening is sustainable in the long term. A strengthened rand is a great opportunity to invest offshore, but a strengthened rand is not necessarily permanent, as the long-term graph shows.

Ultima urges long term offshore investors to stay calm and to pursue their long-term investment strategies, as we believe that more growth is achievable in offshore markets. For new investors, Ultima continues to advise good geographical diversification in offshore markets, which should form part of any well-structured investment plan.